1. Heat a cast-iron skillet over medium-high heat, and preheat the oven to 375°F.
2. Season the chicken breasts with salt and pepper. Carefully place them in the pan with the skin side down. Allow them to cook until golden brown.
3. Flip the chicken breasts over, and turn off the heat. Place the entire pan in the oven, and cook for 15 minutes or until the internal temperature reads 165°F at the thickest part of the breast.
4. While the chicken cooks, preheat the grill on medium-high heat.
5. Toss the tomatoes and sliced onions in the olive oil, salt and pepper; place on the grill to char.
6. Toss the bread cubes in olive oil and salt and pepper; place on the grill to toast.
7. Move all the ingredients occasionally to prevent burning. (You want a nice char on multiple surfaces of the ingredients.)
8. Remove everything from the heat, and allow to cool.
9. Remove the chicken breasts from the oven, and rest them on a wire rack.
10. Toss the tomatoes, onions, croutons and spring mix with a generous amount of Lemon Vinaigrette.
11. Using tongs, transfer the mixture into a bowl.
12. Slice the chicken into ¼-inch slices, and shingle them over the salad.
13. Grate the Parmesan over the entire dish, and finish with the cracked black pepper. 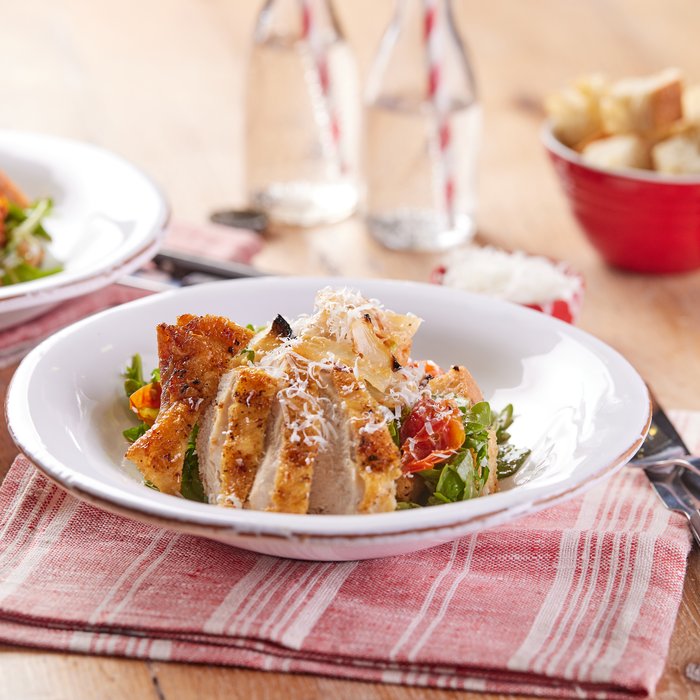